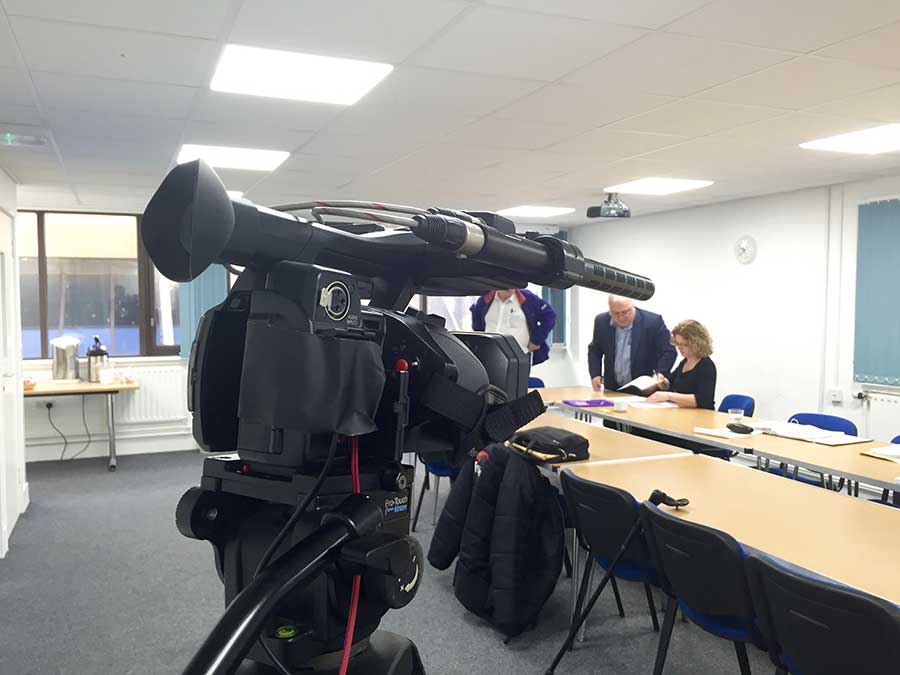 The meeting. We were asked to film a 2 hour meeting between the hours of 10am to 12pm. The subject of the meeting was to discuss the running of a charity called Brighton & Hove Seaside Community Homes. The pupose of the video was to act as a training DVD for the charity.

The client asked for one camera locked off, to film the proceedings. We used our Panasonic HX1000, setup up to record 50 MegaBits per second at 1080p. with two SD cards in camera it took up 42 Gigabytes of space. This was spread between the two 32 Gigabyte  SD cards in the camera. (once was card is full the camera starts recording onto the other card without a break in the video.)

To begin with I was going to place a table top microphone in the center of the conference table. But after monitoring the sound I found that it picked up far too much paper rustling noise. In the end I went with a shotgun ME66 Sennheiser short shotgun microphone. Even thou this was mounted on camera it provided excellent sound pick up for the whole meeting. For extra backup I mounted a Zoom HN4 behaind the main speaker. This was set to a  120 degrees microphone pick up angle.

The client asked for the final video of the meeting to be burn’t to DVD. The final footage was imported into Final Cut Pro. The video footage was then downscaled to Standard Definition. From here the footage was trimmed and the sound normalised and cleaned. DVD authoring and burning takes place on the Final Cut Pro timeline. We then have the ability to print directly onto the face of the DVD.The DVD was then posted to the client.

Video Image Productions are based in Sussex UK. We provide camera crew hire to anywhere in the UK or Internationally.